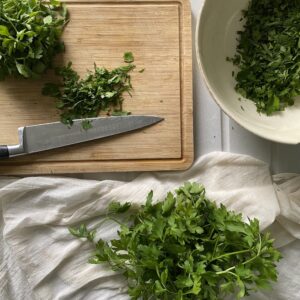 In Lebanon tabbouleh has almost mythical status.  When eating with Lebanese friends and family, or at a restaurant, everyone takes immense pride in this salad. Every Lebanese household, will give it their own special twist, making it uniquely theirs.  Shorkk’s tabbouleh comes courtsey of Barbara Massaad from her cookbook Mezze.

Probably the most misunderstood element of this salad is its main ingredient.  It’s parsley, not bulgur wheat! We’ve seen recipes online (not mentioning any names) where the suggested 200g of bulgur wheat drew loud exclamations from members of the household!  As Barbara Massaad, says “Grain salads that pretend to be tabbouleh are simply an insult to the real thing!”

Barbara Massaad admits it does take a bit of time to prepare the parsley.  If you have a Middle Eastern shop near you, they’ll have large bunches of parsley so you can check the leaves are tender, much better than buying expensive supermarket packets where you can’t feel the leaves.  Barbara proposes washing the bunches then leaving them to dry in a colander or on a tea towel, so there’s no water left on them (the resulting mush will have you regretting your impatience!) Only then do you carefully pick out the stems and put them together in several small bunches.  Then comes the slicing, which Kamal Mouzawak, founder of Beirut’s famous farmers’ market, Souk el Tayeb, sees as essential.  Sharp knife in hand, holding the bunch firmly so that you can slice finely, if you’ve previously thought of parsley as a garnish, this will be a revelation. The smell of the sliced leaves gets your tastes buds going, and as the leaves aren’t bruised, they don’t turn mushy. If the board is dry once you transfer them to the bowl – you’ve done well!  Taking care to cover the mint once chopped, means that it won’t blacken. Anissa Helou also mentions the importance of using fine bulgur wheat,  the darker variety if you can find it.

As spring arrives, and parsley leaves soften, this is a great time to try Barbara Massaad’s recipe.

Tear up some white cabbage leaves or use romain lettuce leaves so that people can scoop up the tabbouleh and eat it with their fingers!  Delicious served alongside lamb shawarma or roast lamb.

Shopping Cart
We use cookies on our website to give you the most relevant experience by remembering your preferences and repeat visits. By clicking “Accept All”, you consent to the use of ALL the cookies. However, you may visit "Cookie Settings" to provide a controlled consent.
Cookie SettingsAccept All
Manage consent

This website uses cookies to improve your experience while you navigate through the website. Out of these, the cookies that are categorized as necessary are stored on your browser as they are essential for the working of basic functionalities of the website. We also use third-party cookies that help us analyze and understand how you use this website. These cookies will be stored in your browser only with your consent. You also have the option to opt-out of these cookies. But opting out of some of these cookies may affect your browsing experience.
Necessary Always Enabled
Necessary cookies are absolutely essential for the website to function properly. These cookies ensure basic functionalities and security features of the website, anonymously.
Functional
Functional cookies help to perform certain functionalities like sharing the content of the website on social media platforms, collect feedbacks, and other third-party features.
Performance
Performance cookies are used to understand and analyze the key performance indexes of the website which helps in delivering a better user experience for the visitors.
Analytics
Analytical cookies are used to understand how visitors interact with the website. These cookies help provide information on metrics the number of visitors, bounce rate, traffic source, etc.
Advertisement
Advertisement cookies are used to provide visitors with relevant ads and marketing campaigns. These cookies track visitors across websites and collect information to provide customized ads.
Others
Other uncategorized cookies are those that are being analyzed and have not been classified into a category as yet.
SAVE & ACCEPT
notify me when this item is back in stock We will inform you when the product is back in stock. Please leave your email address below.